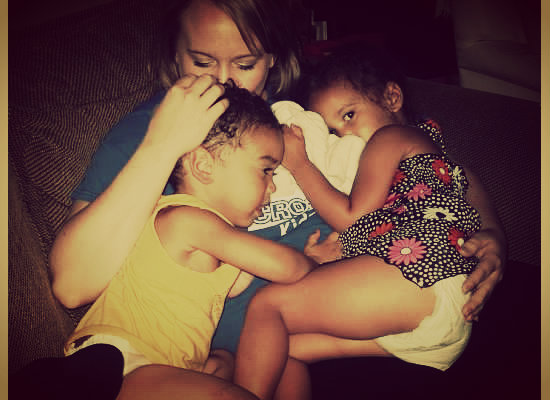 During this crazy process of rearing children, it seems we are always asking our kids to give up stuff.  Whether it's the comfort of a blankie or the comfort of being able to pee without getting out of bed, we ask them to give up the things that they are used to, in hopes that they will mature into healthy, productive citizens.  The process is usually difficult, but both the parent and the child almost always survive and come out of it better off. 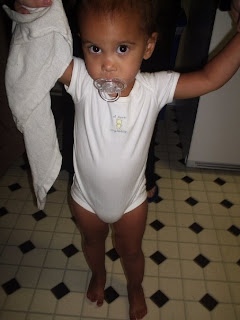 My daughter's pacifier phase lasted much longer than the acceptable paci regulations would allow.  When we finally discussed giving it up, Crosbie decided she wanted to give it to Mickey Mouse.  Whatever works, right?  So, we packed up her paci's and headed to the Disney Store (I know, I know, but it was the best I could come up with).  The workers at the store had apparently been down this road before, and without a second thought, they took her pacifiers and told her that Mickey was so proud of her.  They even filled out a certificate for her and gave her a gift bag!  She left the store beaming and never asked for her pacifier again.  It was obvious that I had this parenting thing down. 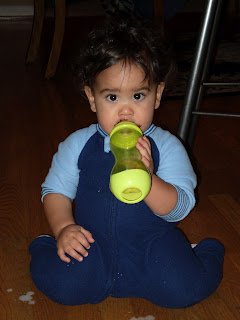 Then came Dominic.  Dominic's drug of choice was the sippy cup.  He couldn't sleep without one in his mouth.  And because there is not a sippy cup on the market that does not leak at least a little bit, by the end of the night his bed would be covered in milk stains. It was time to have the difficult "give up the sippy cup" conversation.  As he lay in bed one night, I sat down next to him and brought up the subject.  I decided to lead with a heartwarming story about a similar situation in my own childhood in hopes that he would see the light, just like they always did on the Cosby show.

Needless to say, he got to use his beloved sippy cup that night and I took a tough blow to my parenting ego.  Eventually, though, he relinquished the cup and moved on.

During these times, I found it very difficult to ask my kiddos to give up the creature comforts that they held so dear.  I felt mean and selfishly, I hated the idea that they were growing up at all.  In the end, though,  I had to be a parent and make the decision that was in the best interest for my children.  After all, you can't take your paci with you to kindergarten.

I am coming to realize that this process is one that continues throughout our entire lives.  Giving up so we can grow.  Surrender.....

Many of us choose to hold onto things to comfort ourselves and, in turn, remain immature.  We use "pacifiers" to keep ourselves from truly feeling the pain of this life, and never really learn to rely on God for our strength and reassurance.  I have them....you have them.  They hold us back. They stunt our growth.  We continually refuse to learn a lesson that our toddlers have mastered.

What is God asking us to give up so we can grow?

Hebrews 5:12-14 (The Message)
"By this time you ought to be teachers yourselves, yet here I find you need someone to sit down with you and go over the basics on God again, starting from square one—baby’s milk, when you should have been on solid food long ago! Milk is for beginners, inexperienced in God’s ways; solid food is for the mature, who have some practice in telling right from wrong."

God leaves the choice up to us:  Am I going to take my paci with me to kindergarten or grow up and finally surrender?  If Crosbie and Dominic can do it.....then so can I.

Posted by Unknown at 7:12 AM No comments:

Pumpkins.  Probably not something you think about on a daily basis.  In our family, though, they have become a high priority.  So high, in fact, that pumpkins make a regular appearance on our bedtime prayer list.  How did they get there?  It all started a few years ago, on our First Annual Family Pumpkin Carving Night (Ok, we don't really call it that, but I am considering it for future use). 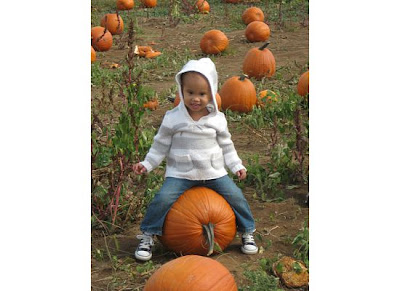 My daughter, Crosbie, was 3 years old and my son, Dominic was 2.  We had already taken the exciting trip to the pumpkin patch to pick out pumpkins and it was time for the carving to begin.  Crosbie explained that she wanted an angry pumpkin and Dominic preferred a sad face for his.  I don't knrow if these choices say something about the emotional health of my children, but I prefer to think that they were trying to create pumpkins that were in the proper Halloween spirit.

Scooping the seeds out of the pumpkins, one of my favorite parts as a kid, proved to be traumatizing.  My son has a "thing" about getting his hands dirty so the squishy, gooey, insides of a pumpkin were his worst nightmare.  His reaction quickly spread to my daughter, as they often do at that age, and the next thing we knew, hands were being scrubbed and sanitized, and Mommy was left to finish the job.  On to the carving.

Guess what?  A two and a three year old can't carve anything.  So, after they gave me a basic description of what they wanted the faces to look like, they were off in the other room building with blocks as I toiled away making the perfect angry and sad Jack-o-lanterns.  And when I say perfect, I mean perfect.  No, seriously, they were really good. :)

When Angry and Sad pumpkin were complete, we brought them out to the front porch and lit the candle inside, another task that is inappropriate for young children. (Still trying to figure out who thought up the idea to have children carve something with large knives and then light it on fire and call it family fun).  As we stood and stared at our beautiful, glowing, and well crafted :) creations, it began to rain.  We all ran inside and watched through the window as Angry and Sad got drenched. 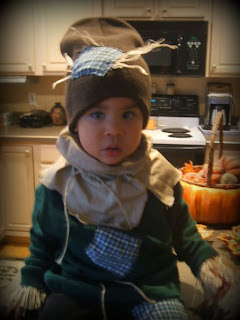 That night at bedtime we said our prayers, as usual.  After the amen, Crosbie's sweet little voice spoke up and said, "......and we pray for the pumpkins."  She had been worrying about them all night and I knew in her own little way, she was praying for God's protection over them in the storm.  I answered, "Yes, and we pray for the pumpkins."  This made Crosbie feel better and I tucked them into bed and kissed them goodnight.

t
As days passed, each night I would say the prayer, and after every amen came Crosbie's tiny voice, "....and we pray for the pumpkins."  "Yes, and we pray for the pumpkins."  I began to worry about the tragedy that was about to occur when we had to throw the pumpkins away, yet another unfortunate part of this family tradition.  One day, when the pumpkins were beginning to resemble little, wrinkled, toothless old men, I decided they had to go.  While they were napping I tossed them in the garbage and hoped they wouldn't notice.  No such luck.  After a serious discussion and a short cry, they understood the pumpkins had to go.  However, the prayers for them did not.

Two and half years later, yes, I said two and a half YEARS, we are still praying for the pumpkins each night.  Last night, Dominic said to me, "Mommy, why do we pray for pumpkins?"  I explained the origin of our special prayer request and tucked him in.  As I shut their door and walked away, I thought about the fact that my kids had continued this nightly ritual for years and had no idea why.  They simply pray for the pumpkins because that's what we do.

Don't get me wrong, I'm not implying that praying for the pumpkins was wrong, just saying it got me thinking.  What am I teaching my kids about prayer?  Do they see it as a ritual they don't understand or an actual conversation with God?  Are we teaching our children why we do what we do and believe what we believe?  At times, I can tend to pull the "because I said so" card, because my kids are constantly asking me, "Why?"  When it comes to their spiritual walk especially, though, they deserve to know the answer to those "whys."

This week, I have planned two short and easy family activities (listed below) that I hope will evoke some important questions, lead to discussions, and maybe answer some of those whys.  Most importantly, I want to make a conscious effort to model what a true relationship with God looks like. My kids are constantly watching and imitating me.  It would be great for them to pick up some good habits along with my bad ones!

Ephesians 5:1-2: Watch what God does, and then you do it, like children who learn proper behavior from their parents. Mostly what God does is love you. Keep company with him and learn a life of love. Observe how Christ loved us. His love was not cautious but extravagant. He didn't love in order to get something from us but to give everything of himself to us. Love like that.

As for now, we will continue to pray for the pumpkins.  With fall approaching, we will soon take that yearly trip to the pumpkin patch, and for a few weeks, our prayer request will actually make sense......sort of.

Email God:  My kids love to play on the computer.  What better way to get them excited about communicating with God?  I want to teach them that talking to God doesn't have to be formal, only at certain time of day, or done a certain way.  You can talk to God the way you talk to your friends.  Godsemailbox.com is an actual website you can go to and email God.  The emails are not read by a person, you are just basically sending them into cyberspace where only God can read them.  I am going to have my kids think of one thing they are worried about and email it to God.

Jar of Questions:  Put several "Why" questions in a jar (I will come up with some important ones myself, but will also allow the kids to come up with some as well).  At dinner or some other time when everyone is together (bedtime, in the car, etc.), pull one out and discuss.  Keep a Bible near to look things up.  This can also be used when one of the kids asks a question but there is no time to properly answer it.  "Why don't we write that question down and put it in our jar?"

Posted by Unknown at 8:35 PM No comments: